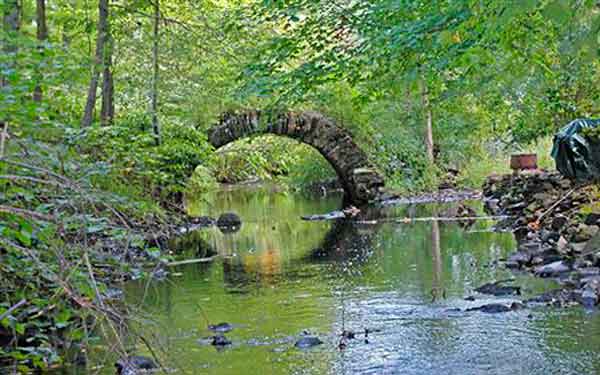 In partnership with canal expert Carl E. Walter, the Simsbury Free Library (SFL) has just published nine maps of the Farmington Canal. The map series includes one for each of the towns through which the canal once ran: New Haven, Hamden, Cheshire, Southington, Plainville, Farmington, Avon, Simsbury and Granby.

Each map notes the various features that still remain or were once there (e.g., culverts, bridges, locks, etc.). The reverse side of each map provides a narrative about the need for the canal, the construction and financing of the canal, the challenges running the canal, and the reasons for its demise. Also included is a canal topic unique to each map: tolls, road and farm bridges, locks, waste weirs, canal boats, aqueducts, canal basins, culverts, dams, and feeders. Each map features 10 town-specific photos of the canal and its features, many of them taken in the 1930s.

Construction of the Farmington Canal began in 1825 and was completed to Westfield, Massachusetts in 1829; it was quite an undertaking considering all of the work was done by the labor of men and animals. In 1934, the canal was extended to Northampton, Massachusetts, though its opening was delayed until 1835 due to a water shortage. While the canal was closed most of the 1837 season due to winter storm damage, it was in operation with varying levels of success until it was abandoned in 1847.