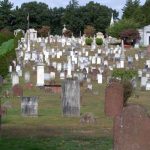 The SFL grounds are adjacent to the historic Simsbury Cemetery, which has gravestones dating from 1688 to the present. It is the final resting place for Amos Richards Eno and his wife, Lucy Jane Phelps Eno, and many members of their family, including Antoinette Eno Wood, William Phelps Eno and their older brother, Amos F. Eno, a major benefactor of the New York Public Library. Many of the earlier gravestones are significant examples of periods in mortuary art. Those interred there include veterans all of America’s wars, including the French and Indian, Revolutionary, and Civil War. The SFL has published Simsbury Cemetery Gravestone Inscriptions, Simsbury, Connecticut, 1688-2000, Volume I: The Old Section compiled by Joyce A. Cahill. 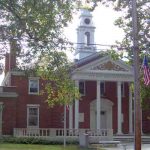 Across Hopmeadow Street from the SFL is the Eno Memorial Hall, a red brick, white columned Colonial Revival building which opened in 1932. It was given posthumously to the town by Antoinette Eno Woods in memory of her parents, Lucy Jane Phelps and Amos Richards Eno. For many years Eno Memorial Hall served Simsbury as its town hall as well as a community center and the home of the Abigail Phelps Chapter of the Daughters of the American Revolution, for which Mrs. Wood had served as regent.

Only one town office remains, the Social Services Department, but the multi-functional public building is still the home of the D.A.R. It also houses Simsbury Community Television, Inc. (SCTV: Channels 5, 21, 22) and the Simsbury Senior Center. Its auditorium is the venue for entertainment and cultural programs. 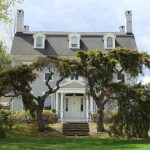 Now an elegant country inn, the house on a rise half a block south of the SFL was built by Elisha Phelps, the father of Lucy Jane Phelps, wife of Amos R. Eno. Mr. Phelps was a judge and congressman and his father, Noah Phelps, was a Revolutionary War hero. After Elisha Phelps died, Lucy and Amos Eno purchased the house from his other heirs and used it as their summer home. Both they and their daughter Antoinette modified and enlarged it. One summer it saw the birth of their grandson, Gifford Pinchot, who became the first head of the U.S. Forestry Department and Governor of Pennsylvania. The building is now on the National Register of Historic Places.

For more about the history of the Simsbury 1820 House, go to: www.simsbury1820house.com 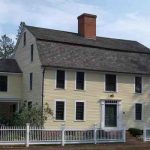 Owned by the Simsbury Historical Society, this house two blocks north of the SFL was built in 1771 by the brother of Revolutionary War hero Noah Phelps and owned by him for a time. It served during several periods as a tavern.

For more about the history of the house, go to: www.simsburyhistory.org

In 1883 the Town of Simsbury accepted the gift of a farm from Amos R. Eno “for the support and care” of the town’s poor. Today the farmhouse and a portion of its original acreage are preserved by the Community Farm of Simsbury, Inc. It is located at 71 Wolcott Road, about 3.2 miles northeast of the Simsbury Free Library.

For more about the farm, go to: www.facebook.com/communityfarmofsimsbury