Gifford Pinchot one of the founding fathers of the global conservation movement was BORN HERE IN SIMSBURY. His grandfather was Amos R. Eno (founder of the SFL). His mother was Mary Jane Eno Pinchot.

Pinchot was a friend and colleague of President Theodore Roosevelt who appointed him first Chief of the US Forest Service. He later served twice as Governor of Pennsylvania.

He reformed the management and development of forests in the US and advocated planned use and renewal so that forests could be used to produce whatever they could “yield for the service of man.”

His family had made a great fortune from lumbering but they came to regret the damage to the land that resulted from their work. Gifford’s father suggested that he become a “forester,” an unknown profession in the U.S. at the time. After graduating from Yale in 1889, he studied at the French National School of Forestry for a year. In 1900 Gifford and his father endowed the Yale School of Forestry.

Pinchot’s approach was different from other leading forestry experts of his day. He had a national (versus regional) vision. Most significantly he tried to find a middle ground between the timber companies who urged that public policy should be to disperse resources to the private sector for development and the forest preservationists (e.g., John Muir) who were deeply opposed to “commercializing nature.”

His vision was for forests to be developed by private enterprise BUT only in accordance with scientific forest management practices and for fees payable to the US Treasury.

The political debate raged at the national level. Preservationists were opposed to wide scale timber cutting while Congress was increasingly in favor of commercial exploitation and hostile to forest conservation. Pinchot was attacked from both sides.

When William Howard Taft became President in 1908, Pinchot was dismissed from office. The conservation controversy was part of the reason that the Republican Party split with Roosevelt, Pinchot and others forming the new Progressive (“Bull Moose”) Party.

In 1910 a massive forest fire (“The Big Burn”) destroyed three million acres of forest in Washington, Montana and Idaho. In the following years the primary role of the Forest Service was shifted to firefighting. In effect protecting trees so that private interests could cut them down later. Pinchot was severely disappointed.

The Pinchot family donated Grey Towers their magnificent ancestral estate in Millwood, PA to the US Forest Service. In 1963, President Kennedy spoke at the acceptance ceremony and praise Gifford Pinchot’s efforts. He dedicated the Pinchot Institute for Conservation, which is headquartered in Washington, D.C. The Institute is a not for profit organization and today continues Pinchot’s legacy of conservation leadership and efforts to achieve sustainability in forestry. 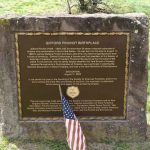 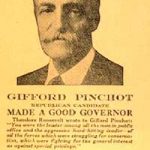 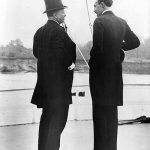