Book of World War I letters written by Simsbury native 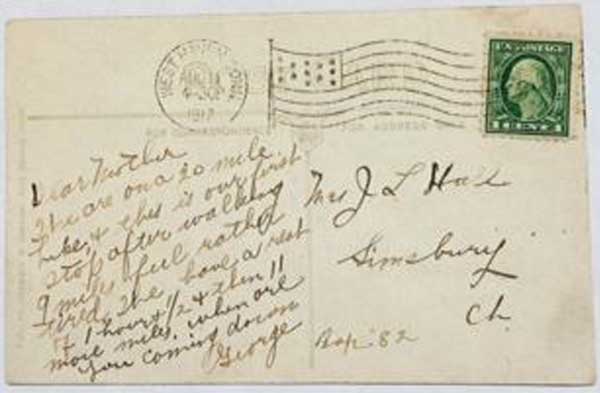 Thank you so much to Joe Hall (of Hall’s Farm on Terry’s Plain) for sharing his great uncle’s World War I letters and allowing us to scan them. If you are a Simsbury or WWI history buff, stop in and have a look at our book of 44 letters that George L. Hall sent home between August 11, 1917 and October 21, 1918. Sadly, George was killed in action on October 28th, 1918, just 2 weeks before the Germans surrendered.

The letters are a great look at the life of a 20-21 year old soldier in World War I and there a number of Simsbury tidbits as well. George mentions the other Simsbury boys he sees in France, asks his mother to send fruit cake, hard candies and American cigarettes and tobacco, mentions the Hartford Courant and the “Farmington Valley”, talks about how he can’t tell them much because of the censors (most of the letters have the censor’s signature, and at least one letter has a word or phrase cut out), he asks his brother how the Simsbury football team is doing, and the Home Guard.