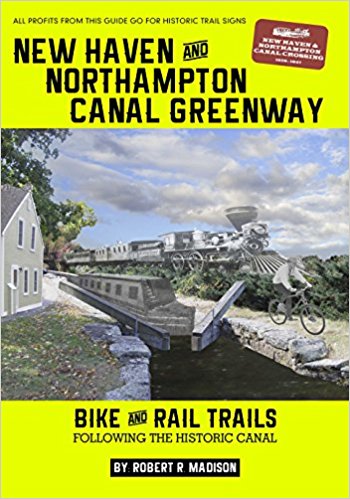 Canal enthusiasts and history lovers, mark your calendars for Thursday, September 28, at 7:00 pm.

Bob Madison, author of “The New Haven and Northampton Canal Greenway: Bike and Rail Trails Following the Historic Canal”, a rails-to-trails book whose roots originated from the longest canal system in New England, is scheduled to speak on September 28, at the Simsbury Free Library.  The Canal Greenway takes the bicyclist or hiker on a historic trip through sixteen towns that parallel the Connecticut River into the interior of Western New England. In 1825, the builders of the Erie Canal finished their work and came over to Connecticut and Massachusetts to start work on a new canal connecting Long Island Sound to the interior of Western New England. With the invention of the steam engine the canal was no longer profitable. Later, with the demise of the railroad, bike and rail trails followed the historic canal and the railroad. This rails-to-trails book is a comprehensive guide which includes trail maps, trailhead descriptions, attractions, distances and a little history of each of the sixteen towns along with the history of the canal and the railroad as the modern rail trail works its way along some 87 miles.  Included in the book are 16 watercolors that blend the current view of the bike trails with the historic canal and railroad imaginings.